The Pentewan Railway in Cornwall was possibly unique in having three* gauges in its lifetime. Christopher Hawkins built the original rai...

After a lot of deliberation I have taken the plunge to replace the CT Elektronik decoders on my K1 with a Zimo MX645 for the front LP engine and a MX633 for the rear HP engine.

Although it is a heavy engine with common pickup on all 8 wheels it still suffered a little from power dropouts which mainly manifested itself in spluttery sound. Therefore the rebuild includes adding stayalives in the form of a bank of 4 x 220uf tantalum capacitors per engine.

I stripped out the memory wire rigging that operated the valve gear (forward/reverse) as it never really worked satisfactorily. However I still have a hankering to make this work so have acquired two of these tiny servos:

I've worked out that these could just fit alongside the motor in the location shown in the photo below. Don't forget this is all hidden inside the tanks - the motor, decoder and wiring only just fit as it is! 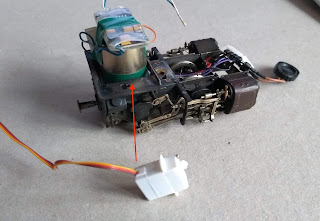 However, before I try fitting it I'm going to hook it up to the decoder and work out what settings allow the servo to move with direction. One problem is only the MX645 has the 5V supply necessary to drive these servos without extra circuitry (for which I have no space) so if successful I will probably drive the rear engine servo from the front using some spare wiring connections in the steam pipe.

There is also still the hope to add automated uncoupling using tiny RC actuators for which there is even less space for, although at least the memory wire is no longer in the way. 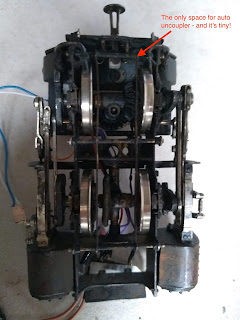 Update 16th Jan - I've now temporarily hooked up the servo to the +5v supply on the MX645 (soldered to a capacitor as per instructions!) and activated the servo CVs with DecoderPro and it works! I've now want to work out how to make it directional. More manual gleaning and chatting to friends methinks.

Belated update August 2019 - I came to the conclusion a few months back that it was not realistic to get the servos and operating linkage in place without complete disassembly of the engine units. In practice this would be complete breakdown of everything back to component parts of: wheels, motion, axleboxes, etc., and then build them again with some operating linkage in place. As it took me 4 1/2 years to build it in the first place, and I still have lots of other locos and track etc. to build, I decided I would abandon the operation. Thus it was reassembled, and the painting touched up and re-weathered and it is now ready for operation again.

Postscript May 2020 - Operation of the re-chipped K1 proved problematic. The Zimo chips come with immersive drive which means you control the braking with F2. Well that's the theory but the MX633 had an older firmware version so didn't seem to have the immersive drive. Furthermore, it appeared the immersive drive on the MX645 only worked in one direction. Thus the engines were dismantled once again and the chips returned to the supplier for a firmware upgrade. For various reasons I am still awaiting their return.
Posted by John Clutterbuck at 09:57